The opening novices event on day 2 is run at the intermediary distance of 2 and half miles and in the most recent years been the guide to which horses will be prominent in the champion hurdle picture in 12 months time.  Interestingly it might actually see the best two novices around clash as it did last year (Altior subsequently proved that wrong).  Last year Yanworth could not be beaten, but Yorkhill turned up and swotted him aside.  This year’s pretenders are Willie Mullin’s Champion Bumper 3rd Bacardys who since his fall has been impressive over the timber particularly in the Deloitte and is this years Irish raider looking to spoil the English party.  Neon’s Wolf’s chances for this are advertised in bright flashing lights; 4 races 4 wins and oozing class, Noel Fehily literally cannot hide his excitement when he talks about him which is saying something about the introverted Irishman.  He seemingly prefers soft ground but the ground isn’t going to be fast and it is officially reported to be on the slow side of good to soft so it shouldn’t inconvenience him.  The value has sailed off into the sunset but I expect the Wolf to be well and truly at the door and having a hose down by 1.35.  At bigger prices Monalee would interest me if he runs (probably going Albert Bartlett route) in this race but as with so many in this line up its hard to 100% call who is running from a couple of days out. 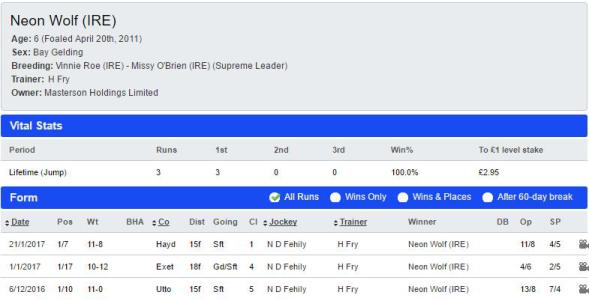 The Might Bite conundrum;  No horse has been as visually impressive this season as Might Bite’s demolition job in the Kauto Star novices chase over christmas - until the last fence spill.  The second, Royal Vacation, then won a good race next time out and franked what would have been about a 10 length victory had Might Bite stood up.  The issue appears with Might Bite that he likes a flat track. Wins at Doncaster and Kempton with two most recent outings at National Hunt HQ reading 5th and 7th.  I am crabbing him a bit, he has won at Cheltenham too.  And thats what everyone else seems to be doing putting down his achievements and putting him up as lay of the festival.  That seems premature however what I will say is this is a tough race.  Might Bite looks like the nimble heavyweight light on his feet, an Ali in equine form whereas it might need more of a Smoking Joe Fraser to win this race, a slugger, a grinder.  Acapella Bourgeois ground his rivals into submission last time out and he absolutely routed the field.  If the ground is soft he will be borderline unbeatable as his trainer reports he loves soft ground and it is key to him.   I doubt it will be soft but he should still put up a bold show and if he sets a fierce tempo he could easily get these novices on the stretch.  He is 7 the perfect age for this race as 7 year olds tend to be the most likely winners.  Might Bite is 8 and so is the first horse significantly overpriced.  Marinero’s last run came over Course and Distance where he finished 3 lengths behind…Thistlecrack.  Admittedly he was flattered by that proximity as Thistlecrack probably well into his warm down having been heavily eased.  However in a race of ifs and buts 25/1 about a horse with C&D form against a class horse is not to be sniffed at.  He has also nearly turned over more experience Monksland and he's been second in a couple of grade 1 races.  There aren’t many of these I am overly keen on and considering the Reynoldstown’s history as a trial I am surprised at the prices of winner bigbadjohn (20/1) and head runner up Flintham (40/1).  Either or both may run in the 4 miler but with NRNB Flintham seems a very big price to hit the frame - related to Carruthers and Coneygree no less, it would be foolish to totally write him off. 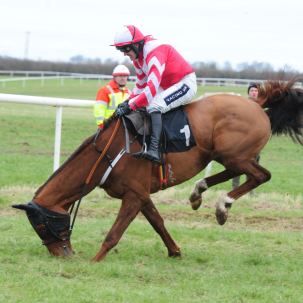 Image above : Acapella Bourgeois lands the hurdle despite kissing the turf and maintains his Thurles domination for the Hughes family

The winning trainers list of this race in the last 6 years; Elliot / Nicholls / Henderson / King / McCain / Elliot / Henderson.  That gives you an illustration that good horses and big trainers lay out some of their top names for the Coral cup and it is amazing to see this year, Tombstone, touted in some quarters as a Champion Hurdle contender, heading the market.  He was fourth in the Supreme and last time out beat Jezki by 4 lengths.  He has to be in the mix.  But 5/1 in this big field is going to be tough to win but I would be amazed if he wasn’t in the first 5 so he's basically an ew play to nothing.  At the time of writing its very tough to know who is going to show up but the two I am going to flag up offer horses that have run over the trip, something which lots of the market principles haven’t.  Peregrine Run looks a really good horse and if you excuse his blow out last time at Warwick he has won 4 on the spin and was well touted for the Neptune or Albert Bartlett.  He has crucially won over this course and distance and carries a pretty low weight.  10/1 seems about fair in this race and I am pretty sweet on him.  The other I like at twice the price is the JP horse River Frost.  He too has won over this distance and whilst he probably isn’t a top horse like tombstone he has guts and seems to keep finding.  These gears will be necessary in this race and I think EW he has a fair chance to show he is still improving having had only 2 runs at the intermediary distance. 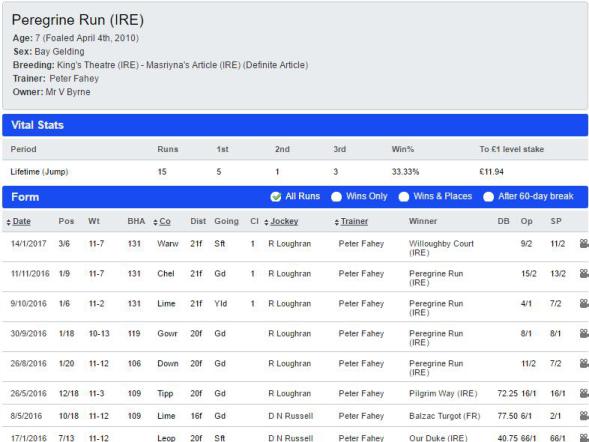 Douvan. Next.  I am not one looking to get on Douvan’s case about the quality of opposition he has faced.  Whoever it has been he has swatted them away.  I again expect him to win with ease, however I think Special Tiara is still value at 20/1 EW.  Available at much bigger a few weeks ago too, this horse will step on the gas from the start and once a few are burnt off should probably be able to hold on for a place seeing as he has come 3rd for the last two years. 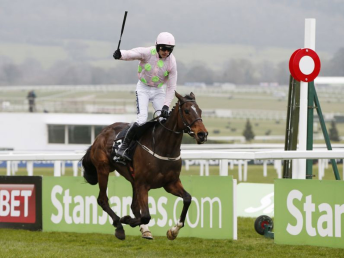 Image above : Douvan romping home in the Arkle last year in 2016

Whilst I am intrigued by the race this is certainly one I wouldn’t be getting carried away with.  Enda Bolger has a Cross Country Course in his back garden and his horses are the top dogs when it comes to this discipline.  All owned by JP McManus the pecking order will be clear.  Cantlow does look the stand out on what he has achieved however he is very short.  It is difficult to find an angle into the race but I may well side with old boy Quanititive Easing.  He saves his best for these big festivals and would have won this 2 years ago had he not been carried out by the French Horse.  Any Curency last years winner is also 12/1 and those two each way could be a way to go.  I will probably just stick with Quantitive Easing as his new prominent riding style saw him beat Cantlow at Punchestown last season and with just the one prep run he should be nice and fresh for this test. 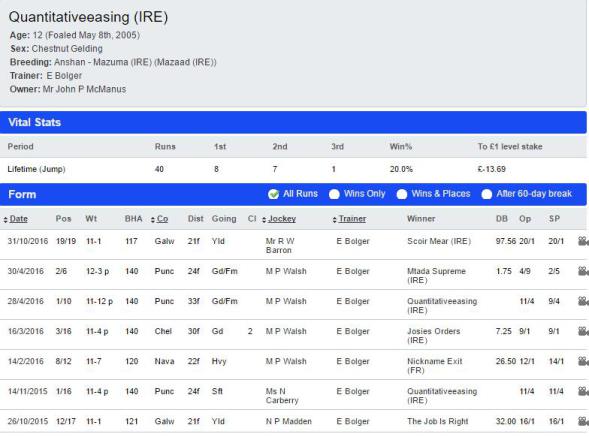 Divin Bere is certainly a horse to keep on side and will probably get backed as a saver given that his victory over Masterblueeyes is very strong form in what is always a very tricky race to decipher.   My thought is one more run in England and Divin Bere’s rating would soar above the 140 limit for this race so he has been kept under wraps.  Furthermore on the ATR stable tour of Henderson’s he’s not even mentioned! Trying not to alert any suspicion! I think he will probably win however the last 5 runnings (13/2, 25/1, 33/1. 25/1, 40/1) have produced some big priced winners so I’m keen in this race to try and unearth a gem and let the big dog eat.  First on the list is the highest rated flat horse in the race, a stat which has yielded winners in the past.  That accolade goes to Percy Street and whilst his form has been a bit disappointing so far he is clearly better on a sound surface and if the ground dries up the 25/1 around a Nicky Henderson second string could look pretty big. Une Artiste who won this as a Henderson second has a very similar look about him.  Flopped in the Adonis at Kempton before turning the tables off 10 stone 8 to win the Fred Winter.  Percy Street has charted the same path having finished 6th in the Adonis last time out and now has the exact same racing weight. My suspicion is the quality in this race has possibly increased since 2012 with some very classy French beds being brought over.  Others of interest are Fidux, also ran in the Adonis, anything by Paul Nicholls who has bossed this race over the past few years and I quite like both Pipe horses.  There is very little to go on and so I will flag up both Henderson horses.  Every avenue I look Divin Bere seems to be at the end of it. 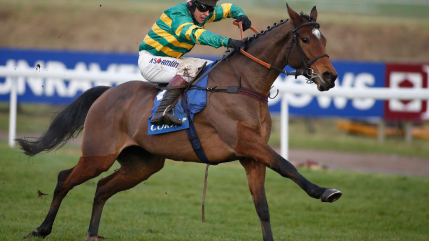 I have been keeping very close tabs on Western Ryder since he began life with Warren Greatrex for a number of reasons.  Continually reported as working the house down the way he won his Ffos Las bumper smacked of class.  The handicapper agreed rating him considerably higher than Cole Harden at the same point in their career.  Exciting times ahead thought Greatrex who admitted to not being a fan of the bumper but agreed that the race looked tailor made for him.  Gavin Sheehan took a bit of responsibility when Western Ryder lost his unbeaten tag at Market Rasen this season but since then his runs at Ascot and Newbury outline him as a very useful prospect.  Over the two races he only lost out to Daphne Du Clos a well thought of Henderson filly who he had to around 20 pounds to!  Whilst the 50/1 and 33/1 and 25/1 have all gone he now is an 8/1 shot.  It’s skinny in a race which is a bit crazy but no horse should cope with it as well as he can and I still think he is EW value as he is almost certain to run a terrific race win lose or draw.  The only other one tom mention is Quick Graham, he hung his chance away last time out but didn't act on the  soft ground. Jockey Noel Fehily insisted to trainer Robbie Power he had to run in the bumper and that he would ride.  A tip in itself at 25/1 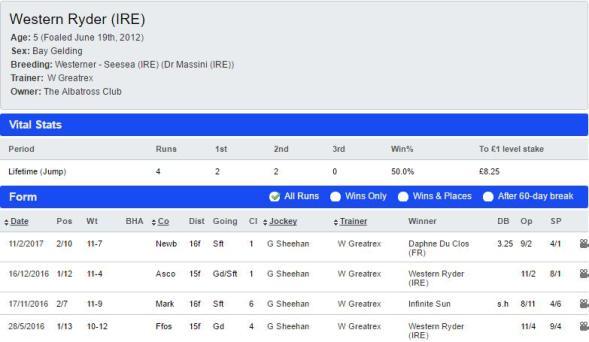 BACK TO THE HOMEPAGE