In this series of articles I will be identifying some key areas where the occasional horse racing punter can look to find a decent bet at a decent price.

Much is made for the need to find “value” when betting;  this is essentially the premise that the bet you want to place is probably a bigger price than it should be and therefore worth an investment;  Marseille at even money to win at home with Payet and Gomis firing is probably value against most teams. Similarly in horse racing a lot can be made of horses at the top end of the market which leaves lesser fancied horses to drift to prices way longer than represents their chances.  In this series we will delve into some easy ways to find them.

In Horse racing there are some powerhouse owners.  They own a large portion of the best horses in training and when they retire the horses are bred with other top class horses in their ownership to make the best of future generations, well that's the theory.  The biggest example of this on the flat is Aiden O’Brien, the trainer for the Coolmore Stud operation.  In his training career he has saddled 272 Group 1 wins, with an incredible 132 Individual Horses being successful at the top level!  With such an wealth of talent, very good horses are going to go into races not being their stables supposed first choice and this is when we can take advantage.  I am going to split this article into two sections focusing on the flat and jumps giving examples of how the embarrassment of riches these top trainer/owners have can lead to us scooping a few decent winners in the satchel.

Which owners should we focus on for 2nd string horses?

If you see these colours then they are representing the might of the Coolmore operation despite being officially owned by the Smiths or the Tabor’s or the Magniers…it's Coolmore.

They only have one trainer (by and large) in the UK and Ireland, Aiden O’Brien. As with most major operations they have a retained jockey who will get the first choice of who to ride.  In this case that jockey is Ryan Moore.

Another good example of this is the 2016 Arc. 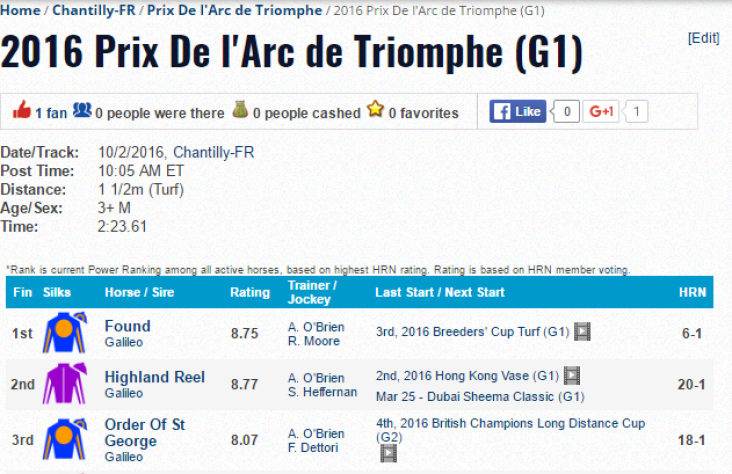 Yes, I accept the first string won on this occasion but because Found had Ryan Moore on board and was 6/1 multiple Group 1 winners Highland Reel and Order of St. George were 20/1 and 14/1 respectively.  This price I believe is based more on the fact they aren’t first choice as opposed to their chance of winning.  It represented excellent ew value to back all 3.  AOB is throwing his top horses at Europe’s premier flat race and as such were certainly overpriced.

Taking this to the extreme in the Oaks the same year Aiden O’Brien (the best trainer with the best horses) saddled 3 horses.  The outsider of the 3 was 50/1.  She had never ran over a mile and half (only over a mile in two group 1’s that season).  Upped to a mile and half and at a whopping 50/1 Qualify won the Oaks.  The reality is any horse trained by Aiden O’Brien should never be 50/1 so it can often pay to look beyond the fancied options.

The only time this rule is to be ignored is if a horse is being employed as a pacemaker and this is often clearly outlined as a plan by the trainer.  However recently even pacemakers have been running good races with Roger Varian’s Roseburg, pacemaker for Postponed, being placed in a group 1 at 50/1 and when Workforce when the Derby in 2010 Coolmore pacemaker At First Sight was second at 100/1.  It can happen but is more uncommon.

Godolphin is slightly different as although they are owned by Sheikh Mohammed (Sheikh of Dubai) and they have two main trainers in the UK; Saeed Bin Suroor and Charlie Appleby.  This has got a bit messy in the past year in terms of jockeys, however William Buick is certainly Charlie Appleby’s retained jockey with Saeed Bin Suroor using a variety of jockeys.  The Dubai world cup is one of the richest races with the winner scooping $10 million. Twice in the last 5 runnings it has been won at a great price by a Godolpin second string horse.

The Godolphin second string wears a white cap, hence the white cap theory and it can often provide some value in races at Meydan.  It becomes tricky to know who Godolphins’ first string is if they come from different stables? Obviously this is hard to know as there is no overall retained jockey cherry picking the best horses.  A good angle is to look for things that don't make sense, when it comes to jockeys, trainers and prices.  Here is an example;

Top trainer Charlie Appleby and his stable retained jockey (who has the choice of all the yards horses) is riding Artigiano (8/1) yet Folkswood is 4/1 for the same trainer.  Folkswood ran a good race in second and went on to win again afterwards but Buick knew who was most likely to win this race and won as the apparent Godolphin 3rd string.  This leapt off the page as weird to me and made it must bet. It’s worth keeping an eye out for these kind of inconsistencies that can help us find a good bet at a good price. 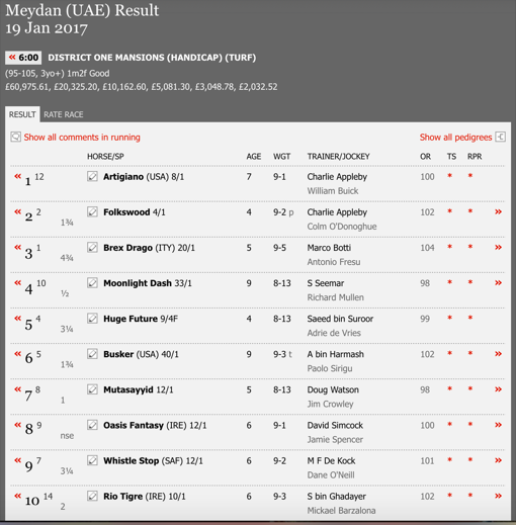 Whilst jockeys often know the best horses this isn’t always the case and regularly in national hunt races jockeys ride the wrong horse and as a result of their choice we get good value on the alternatives.  This is even more prominent in jumps racing as horses from their powerhouse owners split their horses up across several stables. This makes it is difficult to confidently compare who they think will win and as such most of the money goes on the horse the jockey decides to ride, even if there is very little difference between the horses in terms of racing ability. Therefore the prices can differ dramatically between the two horses. 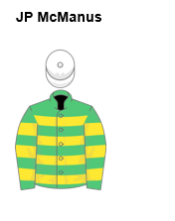 The green and gold are synonymous with national hunt racing made famous by retained jockey Tony McCoy. AP would have first pick of horses and as such prices became very short on his rides so the value is to look elsewhere.  They operate a retained rider which is now Barry Gerraghty so it is easy to identify the second string.

2014 Champion Hurdle - My Tent or Yours (trained in England by Nicky Henderson) was the mount of AP and was 3/1, Jezki (trained in Ireland by Jessica Harrington) was 9/1.  They had raced a year previously finishing 2nd and 3rd in the Supreme Novices hurdle.  Very little between them and they hadn’t raced since.  One was three times the price of the other.  Jezki is the value bet as 9/1 second string and ends up winning by a neck from My Tent or Yours. 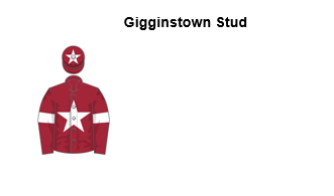 Owned by Mr Ryanair Michael O’Leary they own loads of horses in Ireland and have a retained jockey in Brian Cooper.  However in some big handicaps they have loads of runners and it must make his job very difficult to choose.  Even more difficult is the horses are spread across about 5 different trainers to comparing notes must be difficult.  As a result he picks a horse and the bookies will make that horse shorter than the others despite anything else and if he chooses wrong and one of the others win, than there is likely value in their price as a result.

The Betfair forum is rife with criticism for Bryan Cooper and is apparent inability to pick the right horse.  There is even some suggestion he is put on some horses in order to shorten its odds so the O’Leary’s can make a few quid, though I doubt that is true but the face this sort of thing is discussed illustrates it happens and as such it is an angle worth noting.

A great final example is the Champion Bumper at Cheltenham 2013

It is race difficult to predict anyway and Willie Mullins is regularly the man to follow.  His retained jockey is Ruby Walsh but in these type of races he allows his son Patrick to have the first pick.  Patrick picked Union Dues and went off 9/1 third favourite.  Ruby Walsh (the stable jockey) gets to pick next and picks Briar Hill and he bolts in by 7 lengths at 20/1!

In conclusion this isn’t a piece to say the first string horses won’t win and please note the advice isn’t to always pick the second string.  However examine their credentials along with their price and there is quite a decent chance they have been pushed out to a bigger price because they are perceived less fancied when actually there is very little between both horses.  Often trainers and jockeys say there is little to split them and then the prices go up and one is 3 times the price! Just remember a second string for someone like Willie Mullins or Aiden O’Brien is probably better than most first strings! And that’s where the value lies.

There are no entries yet.