Union Berlin to take advantage of Nurnberg's lack of firepower
There's only one major game today and that is in Bundesliga 2, a very profitable league for Betwade.co.uk
I've been doing some research on this game (all day basically cos I don't think there are any other fixtures of interest !!) and it looks like Union bet are a stand out price as pointed out by Wadey on his Bet of the Day. It's true the H2H is awful but this is very different Union team and a very different Nuremberg to previous campaigns.
Union are typically a mid table side (finishing 6th, 7th and 9th in prior seasons) - whereas this season due to addition of few key players they are now pushing for promotion - 2nd in league
Nurnberg are sort of the opposite - currently sat in mid table (10th) after finishing 3rd last season (and 9th before that, but that was their first season after relegation for Bundesliga 1)
I'm going through the last 10 games of both sides and Nurnberg recent form is awful,   probably largely because of losing their top scorer (Burgstaller) in January transfer window (snapped up by Schalke) - and so even the league table this season (Union 2nd vs Nurnberg 10th) is doing Nurnberg a favour 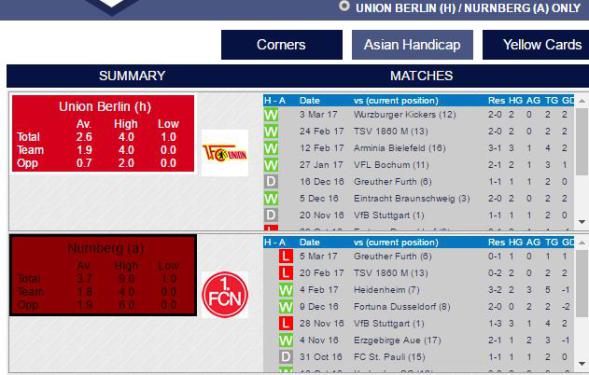 Union Berlin are on a roll, 5 wins in their last 6