One of the biggest skills a trainer needs is knowledge of the programme book i.e. what races come around at what points in the year, how much they are worth and where they are run. Another important factor in this equation is what do they require to get into the race.  Trainers will plot and plan months in advance to ensure their horses run in the appropriate races to get their handicap marks at a level they feel the horse can win off.  In this article we will introduce the notion of horse handicapping and all importantly search out a punting angle for which to make profit.

“Handicaps are intended to produce a competitive race structure that provides an exciting
spectacle for followers of the sport, both for those who enjoy watching closely matched
horses in tight finishes and also from a betting perspective. Betting data confirms that
handicaps are popular with punters, with less competitive races (in terms of the number
of runners and the relative levels of ability) tending to generate lower betting activity.”

According to the British Horseracing Authority (BHA) handicapping is meant to make racing more interesting and it is true, my favourite types of races are handicaps when there is lots of quandary and question over whether horses are well weighted and as such will run a good race and more likely to win.  As a quick overview, when horses run (and sometimes when they don’t) they are continually being “rated” by a team of handicappers.  They judge horses form against each other and will allot horses a weight for the race based on their OR (official rating).  This rating changes on how well or poorly they run.  If they win they also incur a penalty,

“The race conditions for most handicaps includes applying a standard penalty of 6lbs in flat races and 7lb in Jump races for any horse that wins after the Handicapper has had the opportunity to take account of the win in setting the weight to be carried by each horse.”

There are 3 angles to exploit that I am going to discuss here;

David O’Meara is an absolute genius at placing horses in the right races and protecting their handicap marks and in 2014 he illustrated this by scooping a variety of major handicaps all over the country with “well handicapped horses”  I will use his November Handicap winner, Open Eagle, as an example.

A good horse at 2 in France (which usually means they like soft ground), he had a few runs at 3 in England and was given an official rating of 95…the plot is on.  The next 5 runs are in class 2 races some are worth in excess of £50k, so decent races.   He finishes 11/10/9/15/5 and his mark slips down to 82.  This rating is probably a little low to get him in the November handicap a few months later so he prob has to win a race or two but not by much and not too good a race.  He wins an £8k class 4 handicap at York and a 7k class 3 at Redcar and his mark is up to 86.  That is still a full 9lbs off what it was 12 months previous.  Open Eagle gets into the November Handicap off a low weight on soft ground and is probably nine pounds well in (which according to the BHA over this distance is 6 lengths).  Throw in some soft ground and he bolts up by 12 lengths at 15/2.  He was found in the market and went off favourite but he opened at 12/1 that morning and the ‘shrewdies', smelling a plot, clearly dived in.  He is now trained over jumps by Willie Mullins! 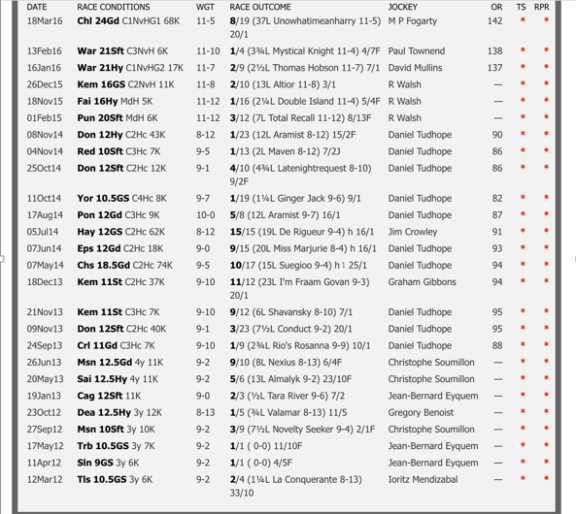 Image above : Open Eagle entries and how he beat the handicapper

This sort of thing happens all the time and if its on the all weather to win a pot of £5k or a big handicap worth £50k or more there are always horses with long range targets in mind.  Our task is to track them down and find them.

Irish trained horses are assessed by the Irish handicapper and whilst Phil Smith (Head of Handicapping at the BHA) believes he keeps close tabs on the Irish runners inevitably trainers are going to be able to take advantage of lenient marks or indeed exploiting a difficulty of comparing Irish and British runners.  Remember the handicapper assesses and makes changes when horses run against each other and confirm form lines.  As the British and Irish horses race with far less frequency this becomes more difficult.  Gordon Elliott and Tony Martin certainly enjoy themselves in the UK and make the most out of their horses handicap marks.  Tony Martin is another master of protecting a handicap mark, none more so than Heartbreak City.  Running off 79 in July 2015 he scooped the 174k Ebor at York off a mark of 103 (only 3 horses ran off a lighter weight) and then went on to agonisingly get touched off (lost a head) in the Melbourne Cup (£1.8 million) and run to a mark of 125!  Firstly what a training performance and secondly a masterclass in placing to ensure the owners picked up maximum prize money on the journey.  The ability of martin to get this horse (Melbourne Cup runner up next time out) into Britain's richest handicap off nearly bottom weight is remarkable.  He duly hacked up by 4 lengths.  This illustrates that the British handicapper was not in the right ball park with his weighting and as such Heartbreak City ran amok and won at 15/2 - again available at bigger in the morning.

With Dundalk’s all weather meetings on a Friday night this makes for another angle and if you see a horse coming over to run at Wolverhampton based purely on its Irish handicap mark it is worth noting.  Often trainers are coming over and scooping races on the all weather over here and by the time the handicapper works them out, they are off back to Ireland.

Mr Boss Man has only ever had 2 wins and 2 seconds on the flat in 16 starts.  His record at Dundalk reads 5/5/5/7/5/5/4 he comes over to Wolverhampton and runs off 2 wins and a second in the space of a month.  The handicapper catches up to him and he’s off back to Ireland.   His trainer spotted a couple of class 6 contests across the Irish sea and connections came back 7k better off.  This is definitely something to keep an eye out for, especially if the horses is described as having its first run in the UK from an Irish trainer. 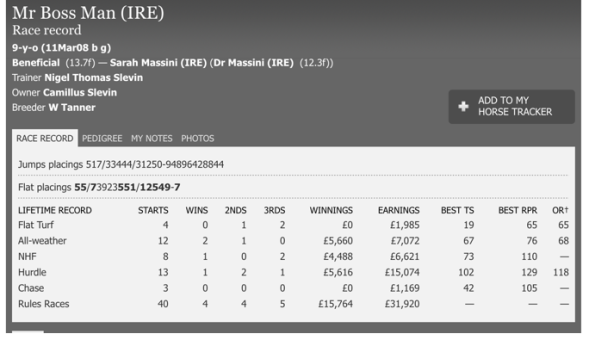 Image above : Mr Boss Man, an Irish horse who ran at Wolves to beat the UK handicapper

In order to qualify for a handicap mark (without going into fine detail) a horse needs to have had 3 runs.  This is deemed a sufficient amount of time for a horse to be judged by the handicapper.

On the flat a theme you often see is young horses running in maidens, having very little chance of winning but running to a) give their horse some experience and b) get three runs into the horse so they can get an official handicap mark and the fun can start. Recent Chelmsford scorer Seaborn is a great example of such a horse to keep an eye out for.  The first thing to note is he is trained by a small trainer in Simon Hodgson (just 7 wins on the flat in last 6 seasons).  In his first maiden he went off 100/1 and raced on the AW at 8 furlongs (1mile).  In the same race trainers such as Sir Michael Stoute and Richard Hannon (2,000 winners in last 6 seasons) had horses running as well as many other top stables such as Mark Johnston, Marco Botti and Ralph Beckett so it stands to reason he was a 100/1 shot.  His second and third races were a similar story going off 66/1 in both races against some big stables.  He qualifies for a handicap mark having beaten just 4 horses home in 3 starts.  The key now is to spot the following; 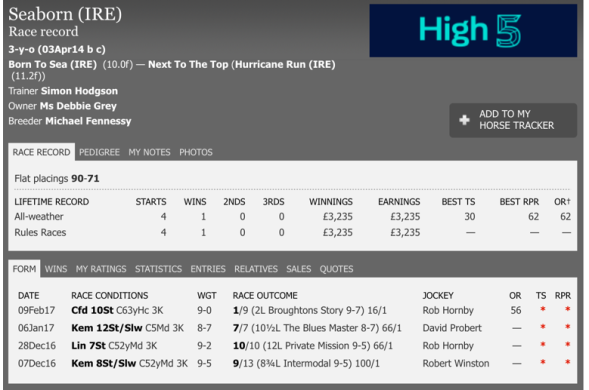 Seaborne is priced up at 16/1 and whilst there is probably not a lot to recommend him on his previous runs in terms of bare form the accumulation of the 4 points made above make him of interest on handicap debut against horses that equally haven't shown much form to date.  The favourite, for example, at 15/8 has never finished better than 4th in 7 runs.  He ended up finishing second to further emphasise these are a very modest bunch and the fact Seaborn has jumped out of the frying pan of decent AW maidens this race would have felt a much easier assignment.  It’s easier to be wise after the event but it is certainly always worth having a second look at handicap debutants and if they are clearly overpriced as Seaborn was then its worth an investment.  The price was reflecting poor form in harder races and the reputation of a small trainer and sometimes it is dangerous to write those things off without a second look.